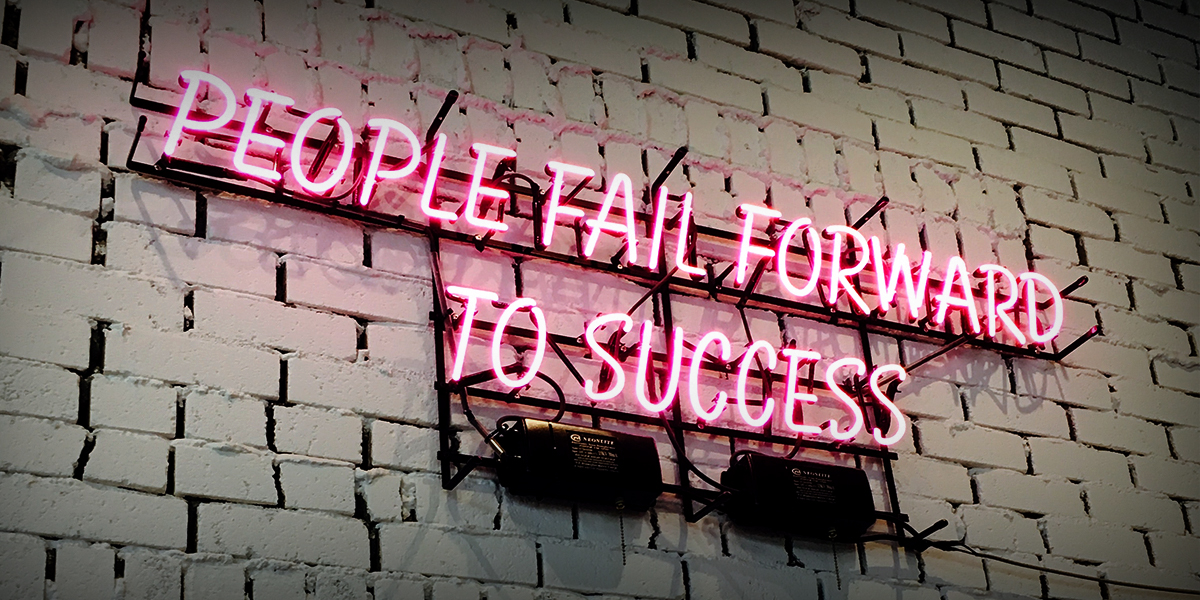 The two moments, whether in life or business, where people are at their most critical are when they fail or when they have succeeded. Your expectations when going into something will either set you up for massive disappointment or it’ll open you up to being able to identify significant opportunity. If you begin to apply the mindset of accepting failure as an inevitable part of the process, you will then begin to understand that failure is a critical part of success.

Marius: 00:04 Fear is the word for today. Fear of things not working out in the business, in life. It doesn’t matter whether you’re a new manager that doesn’t fit into the picture, he doesn’t pitch up for work and all you hope is diminishing or your marketing campaign doesn’t work and it fails in this or in some instance your entire business didn’t make it. Didn’t make the grade. Now we sit and we wonder are we going to do this all again. Should we be concerned about feeling stressed about things that happened in our business and be fearful of something new?

Kyle: 00:46 Yeah, I think the importance of your mindset when it comes to data is super critical. The subject matters which we're talking about are the traits of people that have built really great organisations, great brands that are out there. There are critical moments with anything. If you're looking at a sports game, they always say this is a critical period or this is a critical decision or whatever and it's the same in business as it is in life and the two points where people are in the most critical are when they fail or when they have succeeded. How you respond to those two. I think that the mindset to failure is, how you approach it and what your expectation is going into a business, it’s super critical so you shouldn't be going into anything, in your entire life even, specifically and very much so in business where you don't expect to fail in some regard because I think that what we set ourselves up for is some massive disappointments if that's the way we think about it. That it’s always going to fall into place, that everything's going to go well and it just doesn't happen that way. Then the second part of what we really do is we think it’s “us”, you know. We think I’m on my own and this only ever happens to me. That's just a total lie because if you look at any business, big or small and they’re successful now, I promise you. They went through a huge amount of failure indefinitely and failure is a critical part of success, it’s what we've got to realize. It is a critical part of success. I know for myself. I mean it took me I would say the first five years of my business to actually understand how to hire people. How to have someone working for me and it works out, for them and for us. You know, going through three new people in three months and I think to myself well, I don’t think I’ve got the energy to grow this business anymore and to be honest. It's almost every day that I will have that kind of thought in my mind. What if I just went back to working in my mom's study and did it all by myself again but, then usually five minutes later I think about all the things I want to do. The vision that I have for the company and the projects I want to work with, the type of clients want to work, and I go well if I don’t have the team underneath me then I'm just not going to do it. Then I go back and I start to think about it and think about what can I learn and how can I approach this.

Marius: 03:22 If we think a bit closer to home and if you listen to the news or watched the news yesterday. Again a very big turn, KPMG. They’re now in the spotlight with the new commissioner and so on and so forth. Saying again that’s it’s their fault and that this didn’t happen, they didn’t see it and that’s a complete failure. But the point that I’m making is that we’re still going to have a KPMG after this and perhaps they will also learn from the mistakes whatever they were. But it’s a failure on their side but that we’re not going to hear the word from their side, that we failed twice now in a row so we might as well close shop. We’re not going to hear that. We have to learn from those mistakes and make it personal and stand up again.

Kyle: 04:16 Yeah. The thing is at the end of every failure is a massive opportunity, almost always because you’ve failed at something. It’s critical to understand that we are geared to learn from failure if we get over the initial psychological emotional landmines that we set up ourselves up with. In other words, I’m talking from a personal standpoint of view where first blame yourself, then you start blaming your staff so you have to get over that part where the negativity is just like I don't want to do it anymore and I don't have the energy. Once you get over that failure presents a significant opportunity because its a significant opportunity to learn. I always say to someone you've got to remember that, they say that flying is the safest form of transport. Well, almost every safety feature on an aeroplane is a result of a failure. [Laughter] Someone died so that they would learn to do that or to make that pop rivet out of that piece of steel rather than whatever they did it before. Almost every part of that plane, almost every aspect in terms of safety has resulted in failure. And hence now flying is the safest form of transport. So if you were flying in 1925 I'm sure it was not the safest form of transport. [Laughter] I think that's the thing, we lose that perspective because we’re in the hole. We're right there and we’re in the trench and it’s happening right now and we lose that perspective. As business owners and as people who want to build brands it’s on us to force ourselves to step up. To be honest with ourselves and to do better, if you look at all the great guys that have built brands, for example, Richard Branson. He famously faced bankruptcy a number of times. All his bank managers phoned him on Friday afternoon and said we're pulling all your credit. You have to settle all your credit by Monday morning. He had literally a weekend to raise funding for his airline to redo it. I would say most people would have given up at that stage but he didn’t and look where he is right now.

Marius: 06:51 I also think that again while you’re talking, the mind just wanders along. I was taking in a programme on the BBC yesterday evening about a wonderfully talented and experienced surgeon. All we see at the end of the day as the viewer is this one specific operation that they chose to show and which we see on television and it worked but, he didn’t just arrive there today saying that I’m going to do this operation now and you’re going to see that the patient actually live after this and nobody else wants to or can do this specific operation. What has brought him to this point is many many other patients in the same condition that probably didn’t make it. So out of the experience he can do this and if he has this huge fear of failure again, I mean we’re talking about human life here, we wouldn’t have had him and I wouldn’t have watched the programme.

Kyle: 07:46 Correct and the thing is that everything is moving forward and everything is preparatory to failure. You know what I mean. Again I know I talk about Apple a lot but they’re just such an easy case study. A lot of the technologies that Apple bought out, they did not create. I think it's a bit of a misnomer that a lot of people don't know this but they did not create those technologies. The difference was that Steve Jobs had an eye for something that someone else had gotten to the point where they’d hit the ceiling, they didn’t see the possibility, they couldn’t solve the problem but, he did. Then he would say ok then I’ll buy it from you, I’ll buy that patent from you or I’ll buy that piece of technology. He famously did that a lot he bought a lot of companies. Not for the brand, not for the product, not for the market but, just for the IP. Just for all those ideas and patents they had. Because he knew could take that, combine it with something else he’d done and he could do something else. I watch a show about a doctor that’s a veterinarian specialist vet and he does very amazing things in orthopaedics with animals, hip replacements, ankle replacement. Supervet, yes. And if you watch him every time he does something, he’ll say this is a new version because there was a failure in the previous one, you know what I'm saying. And he doesn't go, okay well you know one case had a bad outcome from the operation so I'm just going to close my entire practice. I’m not saying he doesn't take the failures lightly. I'm sure he does take them very seriously and is very concerned but, at the end of the day, he's realising that he's doing more good by keeping going. You know I say to someone with their brand, if you really believe in your brand, if you’re passionate about it then you should feel like you want to keep going and you're going to figure it out and you’re going to make a profit. So yeah, it’ll be interesting with like, for example, KPMG, how they respond to the bad press. How do they respond to the negative brand value that they will encompass?

Marius: 09:48 Look we can talk about failure and winning after all the whole afternoon. I’d like to end off by saying if we have a look at thousands of years ago if the cavemen gave up from beating rocks against each other to make fire. Again we wouldn’t be here and we would still be in the dark ages. My summary for this afternoon is to rather expect failure. Like you said, if you want to be disappointed then think everything works out precisely as planned it each and every time. So expect failure, deal with it, learn from it. Would that be a wise saying?

Kyle: No, that’s exactly how I would put it, Marius.

Marius: Kyle thank you so much, it’s wonderful talking to you.

Kyle: Thanks so much Marius.